After seeing what FLW did with the Guggenheim, I expected his desert home to be outrageous and astonishing. Of course it wasn’t – the low-slung building fit perfectly with their desert surroundings. Following is my story on the witty and enormously talented architect, who showed flashes of ego throughout his life but who always knew how to design building that worked with their environs. For the story in the June 2012 issue of Perceptive Travel, click here. 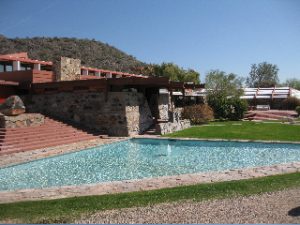 As a kid in New York, I was dazzled by the city’s soaring buildings: the towering Empire State, the wedge-like Flatiron, the art deco Chrysler with its menacing gargoyles. But the building that made perhaps the deepest impression was the Guggenheim Museum. On Fifth Avenue, across the street from Central Park, the museum’s architecture is like nothing else in New York. It doesn’t rise angular and mighty over the city and dominate the skyline; its rounded front, only a few stories above the street, seductively invites you in to explore its spiraling curves.

The Guggenheim’s design doesn’t so much shout, “Look, pay attention to me!” Rather, its confidence seems to say: “I know who I am and I don’t care what you think. I don’t have to fit in with the crowd.” When first seeing it, I felt a surge of curiosity, a sense that anything’s possible. I later learned that the Guggenheim’s first curator and director, Hilla Rebay, said to its architect, Frank Lloyd Wright, “I want a temple of spirit, a monument!

So on a recent trip to Arizona, celebrating the centennial of its statehood this year, I spent a day with Frank Lloyd Wright. Not literally of course – he died in 1959 at the age of 91 – but by visiting his home, Taliesin West, in Scottsdale and meeting with one of his students from the 1950s.

I set out from the Arizona Biltmore, where Wright’s art deco-esque blocks are a central design element, on a clear crisp March morning. From the Phoenix hotel, I drove about a half hour to see Taliesin West and to meet Arnold Roy, a student in Wright’s Taliesin Fellowship starting in 1952. The suburban sprawl gave way to gloriously open desert landscapes of muscular saguaros, graceful ocotillo and stout barrel cacti.

I didn’t expect anything palatial, but I thought I’d find structures among the saguaros that reflected Wright’s monumental ego. He famously said, in a 1957 interview with CBS’s Mike Wallace, “I’ve been accused of saying I was the greatest architect in the world, and if I’d said so I don’t think it would be very arrogant.” Then there’s the story, perhaps apocryphal, of Wright stating his occupation during a trial as “the world’s greatest living architect.” The judge asked how he could say such a thing. Wright’s reply: “I’m under oath.”

However the low-slung buildings on the 500-acre desert property are the epitome of humility, hugging the ground as part of the desertscape, seemingly not protruding from the land but receding into it. Just as the Guggenheim perfectly reflected the wildly experimental modern art of mid-century New York, Taliesin West ideally complements the tawny desert surrounding Wright’s home.

Perhaps his most earthy structure, the one that best highlights his ingenuity, is this refuge in the foothills of Arizona’s McDowell Mountains that served as his home for the last 22 years of his astonishingly productive life. Wright, whose mother’s ancestors came from Wales, named Taliesin after a 6th-century Welsh poet.

At Taliesin West, which celebrates its 75th anniversary this year, Wright created buildings that were “a grace to the landscape,” as he said, “rather than a disgrace.” He designed his buildings to grow “organically” out of the land and felt the built environment should be an extension of the natural world and a way to embrace our shared humanity.

Beginning in the mid-1930s when Arizona had been a state for less than a quarter century, Wright would travel each December from his home in Wisconsin to the then-remote Sonoran Desert outside Scottsdale. After Wright endured a bout with pneumonia in 1936, his wife Olgivanna urged him to spend winters in the salubrious desert climate. From 1937 on, the couple made annual migrations to his new home.

“I was struck by the beauty of the desert,” Wright said, “by the dry clear sun-drenched air, by the startling geometry of the mountains. The entire region was an inspiration and strong contrast to the pastoral landscape of our native Wisconsin. And out of that experience a revelation came for the design of these buildings.”

Lean, with a close-cropped white beard and lit up with the alacrity of a man who loves his work, Arnold Roy greeted me in one of the corridors that frame the land. Roy, now 80, still lives on the property and serves as an archivist for the Frank Lloyd Wright Foundation.

“I met Frank Lloyd Wright at the Plaza Hotel (in New York) while he was working on the Guggenheim,” Roy told me. “He said, ‘Go out West and we’ll try you out.’ That was the start of my architecture career.”

Like Wright’s other students during Taliesin’s early days, Roy spent his eight-year apprenticeship at Taliesin West in a canvas tent. It had been tent-dwelling students who’d built Taliesin’s 40,000 square feet from the ground up during the final two decades of Wright’s life.

“He was 70 years old when he came to Taliesin,” Roy said as we sipped tea. “There was nothing here, he was shy on cash, the apprentices were eager but that’s all you could say about them. And they built this place – by hand.”

Fellow architects derided Wright’s school as a Tom Sawyer-like scheme for extracting work from students and having them pay for the privilege. But Wright, inspired by Olgivanna, who had studied with the mystical teacher Gurdjieff, felt students learned by doing, and that they could absorb knowledge by being in the presence of a master.

Roy heartily agreed saying that just watching the fastidiously dressed Wright work was a lesson in itself. He said Wright could fully conceive a complex building before putting it to paper. And while Roy suggested that Wright enjoyed having admiring students around, he didn’t run the program for the money.

“I paid for that first year and Frank Lloyd Wright gave me seven years of scholarship. He was very generous,” Roy told me. But that didn’t mean Wright was forgiving or soft. He was “looking for people who were serious. If you didn’t pull your weight, he’d tell you to pack up right away.”

And though his students camped in the desert, Wright expected them to dress well for formal events such as recitals on the property. Wright’s acceptance letter to the fellowship told new students to bring “a sleeping bag and the tuxedo.”

To build the walls of much of Taliesin West, Wright employed “desert rubble masonry” composed of rocks found on the property, filled in with mortar made of local sand.

“That’s about as organic as you can get,” tour guide Char Burrows said later that day as we explored the property. “Frank Lloyd Wright was a green builder long before the term was ever applied to architecture.” The stones were called one-man or two-man rocks, she said, depending on how many people it took to lift them. The boulders used in the base of the walls were three-man rocks.

The desert rubble glowed golden in the afternoon sun as Burrows led a group of about 20 into Wright’s office and told us he completed a third of his 1100-plus commissions in the last decade of his life. He often said his religion was Nature, “with a capital N,” she said, and in Taliesin West’s early years Wright prohibited the use of glass windows, preferring canvas to soften the stark desert light.

Later, in a 2010 issue of the Frank Lloyd Wright Quarterly, I read an essay by Bruce Brooks Pfeiffer, who studied under Wright. Taliesin’s fortress-like walls stood in sharp contrast to the airy, billowing textile ceilings, he said. When Wright began building his desert home, he had no heat, no plumbing and not much money. Pfeiffer writes that Taliesin’s living spaces reflect Wright’s limited budget, but “even when creating humble, camp-like spaces, Wright’s architectural genius is always evident.”

As our tour continued into a breezeway between buildings, two-foot triangles at the base of the roof cast diamond shadows on the walls and floor. “He called these ‘eye music’,” Burrows said, and believed the canvas tents and window coverings looked like sails on ship bobbing on a desert ocean. The view looks west toward Camelback Mountain – Wright was furious, Burrows said, when power poles were installed and marred his desert vista.

In the residential wing, which opened to the public in 2004, is Wright’s bedroom. It’s small, almost cramped, with Scandinavian furniture that looks as if it could have come from a mid-century Ikea. I found it surprising that this renowned architect had such a low-ceilinged bedroom, but Wright believed in “compression release” making some spaces small and others expansive to give the sensation of opening up into the natural world.

The Kiva Room, a place for ceremonies, has the feel of a sacred Native American chamber. With floor lights and recessed lighting, which Burrows said Wright invented, the Kiva Room stayed cool during the sweltering desert summers. In the music pavilion is a display of Froebel blocks, a childhood toy that inspired Wright’s love of geometry.

The sloping Cabaret Room, where films were shown and recitals held, is another display of Wright’s wizardly. It stays cool because it’s partly underground. Dinner was served on tables that folded down when the performance started and the acoustics were nearly perfect. The Wrights sat in back so they could overhear what guests up front were saying. “If they weren’t nice,” Burrows said, “they didn’t get invited back.”

There was Wright’s confidence with a dash of attitude. Yet Wright was humble enough to know he didn’t have all the answers, that his ideas shouldn’t be the last word. During Wright’s 22 years at Taliesin West, the modifications never stopped. Returning each winter, Pfeiffer said, Wright would make changes and say, “I’m seeing it with a fresh eye.”

Late in his life, Pfeiffer recalled, Wright said to his students “Boys, what I’ve done here is a charcoal sketch. It’s up to you to finish it when I’m gone.”

Michael Shapiro is author of “A Sense of Place: Great Travel Writers Talk About Their Craft, Lives, and Inspiration” and wrote the text for the pictorial book, “Guatemala: A Journey Through the Land of the Maya.” He has won the Travel Classics contest for best story about Arizona for the past three years. Contact him via www.michaelshapiro.net.

Sidebar on Arizona Biltmore: Many believe it was Frank Lloyd Wright who brought the Arizona Biltmore to the Southwest; in reality it was the Biltmore that lured Wright. The already famous architect traveled from the Midwest to Arizona in 1928 to consult, for a handsome fee of course, with his one-time apprentice draftsman, Albert Chase McArthur, on the design of the Biltmore.

McArthur wanted to use a version of Wright’s art deco-esque blocks, described by Wright’s wife, Olgivanna, as “abstracts inspired by cacti.”

McArthur believed – erroneously – that Wright had a patent on the design and offered to pay Wright $10,000, a prodigious sum back then, to use the textured blocks for the facade of the Biltmore. The venerable architect accepted the fee, never disabusing McArthur of the notion that he’d patented the blocks’ design.